Lowering The Voting Age: Why?

Brainstorm the reasons why young people sought to lower the voting age from 21 to 18 years of age, and then compare your reasoning to what historically was asserted. Also, be certain that you list possible protest issues you feel may have been included in arguments for expanding the franchise.

Now, begin studying the sources shown here and examine the arguments of the 1960s on this issue. 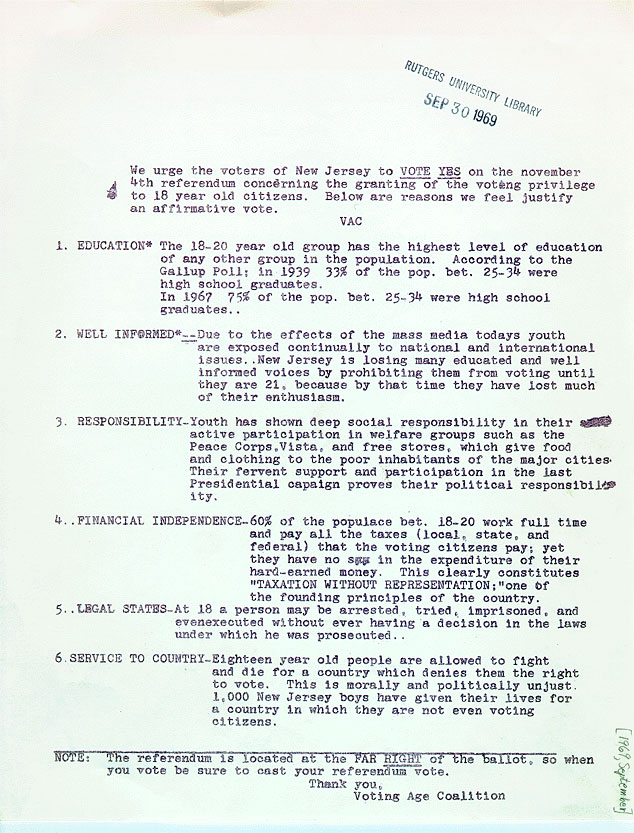 (Note: As chairman of the New Jersey Collegiate Co-ordinating Committee for the 18 Year Old Vote, Student Council Vice President Bob Seidman offers these and other reasons for lowering the voting age.)

The latest Gallup Poll conducted on the question of lowering the voting age, April 1967, shows that "nearly 2 adults out of every 3 (64%) think persons, 18, 19, and 20 years old should be permitted to vote." This certainly indicates wide grass-roots support for the enfranchisement of this segment of the population. The age of 21 has a mythical quality in the United States. It is at this age that young man or woman supposedly becomes an adult. The magic age of 21 was derived from the English tradition of Common Law. It is a legacy of the minimum age required for Knighthood.

This myth is easily dispelled when one looks at the wide range of responsibilities the 18 to 20 year old assumes:

1) All 18 to 20 year olds can sign job contracts and are required to pay State and Federal taxes. And as indicated in the above statistics, over half do precisely that. This is clearly taxation without representation.

2) All 18 to 20 year olds can be tried in adult courts and committed to State or Federal prisons if found guilty. These young men and women have no voice in the laws under which they are tried.

3) All 18 to 20 year olds are excluded from most forms of aid for dependent children.

5) In most states, 18 to 20 year olds are considered to be mature enough to marry without parental consent. And yet, they have no real voice in building the society in which they and their children will live.

6) All 18 to 20 year old males can be drafted into the Armed Forces and both males and females in this age group can contract independently for numerous branches of the Armed Forces.

The majority of the service men now fighting and dying in Vietnam are in this age bracket. Yet, they have neither a voice in United States policies, nor in the men who make them. In his State of the Union Message of Jan. 7, 1954, President Eisenhower said: "For years our citizens between the ages of 18 and 21 have, in time of peril, been summoned to fight for America. They should participate in the political process that produces that fateful summons. I urge Congress to propose to the States a Constitutional amendment permitting citizens to vote when they reach the age of 18."

These are the same young men and women who today fill the ranks of the Peace Corps and VISTA. Americans between the ages of 18 and 21 are indeed full participating citizens, without a vote. According to the Gallup Poll (April 1967), "the group presently denied the vote has a higher average level of schooling than any other age group in the population. The overwhelming majority of persons in the 18-20 age group have been graduated from high school and a sizable proportion are now enrolled in college."Thirty years ago, only 33% of the population in America, between the ages of 25 and 34, were high school graduates. The Bureau of Census, reports that in 1962 the proportion of high school graduates in the same age groups had risen to 64%, or two out of every three persons. The percentage in 1967 climbed to 75 1/2. Along with this increase in the education level of our citizens, comes an increase in exposure to the national and international issues of our time. The modern mass media makes the current American population better informed than at any other time in American history. America is losing many educated and well informed voters as a result of the 21 year old voting age. The hope is that the 1964 (Democratic, Republican) platform will include a plan supporting suffrage for 18, 19 and 20 year olds.

It is generally felt that the most equitable way to enfranchise this segment of the population is through a United States Constitutional amendment. In this way, there would be a uniform voting age throughout the Nation. It is not right that citizens of some states should have the right to vote in national elections at 18, while persons of other states have not. historical precedence shows that slaves and women were granted the vote through Constitutional amendments.

Primarily through the efforts of the student-organized Voting Age Coalition (VAC), New Jersey voters will have the opportunity to decide whether the state's voting age should be lowered to 18. Under state law, a referendum, once passed by the people, is effective immediately. No further ratification is required. VAC, organized on a county basis throughout New Jersey, is working to contact every voter, to bring out every "Yes" vote. Reasons given for lowering the voting age include:

Individuals who oppose a lower voting age cite figures which show that a majority of those between 21 and 30 do not now exercise their right to vote. Backers of the amendment emphasize the need to capture political enthusiasm early, claiming that interest is often lost by the time a person reaches this arbitrary age of 21. It is further believed that earlier participation in the political system will foster sustained interest and activity throughout life.

There is no organized opposition to lowering the voting age. The amendment has been supported by leading political figures, including Governor Richard Hughes and both major party gubernatorial candidates, and has been endorsed by a number of statewide organizations. Among these are the Junior Chamber of Commerce, the Chamber of Commerce, the Police Benevolent Association, the Young Democrats, the state chapter of the National Education Association, and most recently, by the New Jersey State Youth Commission. The Commission, appointed by the Governor to study the problems and needs of youth, sees the 18 year old vote as providing a "meaningful opportunity for channeling the talents and energies of this new generation of Americans into constructive, responsible participation in the public and social issues of the day." According to the Commission's chairman, "This participation is vital to the democratic process."

Despite verbal support from political leaders across the state, VAC has been able to elicit little more than promises of financial aid. As Dupell explained, the politicians are now more concerned with their own campaigns. "Even the Governor committed himself to a $25,000 fundraising drive." Dupell said. "Now he doesn't have the time."

In a recent New York Times article, spokesmen for both major gubernatorial candidates in the state agreed that no funds could be spared in support of the 18 year old vote. "I think this is just the thing we were looking for," Dupell commented. The best way we can prove to ourselves that we can effect change is to be able to say on November 5th that we did it. No politician can say "I did it for you."

‹ Should The Voting Age Be Lowered To 18 Years Of Age? up Then and Now ›