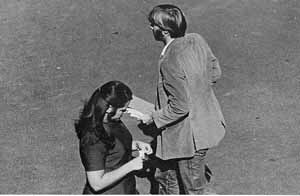 By the incoming Class of 1977, the numbers of women admitted to Rutgers College had risen greatly. Today more than half of Rutgers students are women. Beginning with the Class of 1972, women at Rutgers (and across the country) proved to be student leaders, reporters for their school papers, yearbook editors, scholars, and athletes. Much to their credit, the debate over coeducation seems foreign to students today.

Would you have applied to Rutgers College in 1971? In your response discuss the issue of coeducation and the various arguments your heard. What other factors might influence your decision?

Other questions and topics to explore