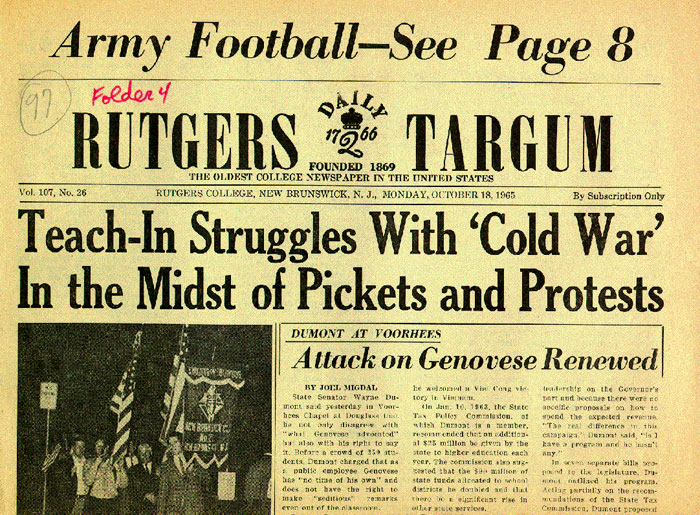 During lunch, you and your friends are discussing the latest three Targum articles about the recent Teach Ins protesting the Vietnam War. Read the excerpts from the Rutgers Daily TARGUM.

Some were curious and were attracted by its novelty. Some wanted a chance to be with their girls all night. Some came to learn. Some needed an excuse to cut classes the next day. Some opposed it; many favored it. But for whatever reason the overflow of Rutgersman, Coopies, faculty members, administrators, and even townies came, and remained until eight o'clock, they all left the "Teach-in on Vietnam" feeling that they, whatever their political views, had in the words of one jubilant, if exhausted spectator, just witnessed the "greatest event presented on this campus in memory."

Although the entire program seemed a highlight in itself, there were two occurrences which appeared to surpass the others. Each centered around the opponents to the Teach-in philosophy.

Gardner scorchingly retaliated that "Western civilization was greatest when isolated to the size of Greek city-states, and failed most miserably when it reached out to take lands it was not entitled to take."

At this point, Susman apparently had heard enough, and, as he later said, went blind with rage. He jumped up from his chair, raced over to the podium where Fitzpatrick was speaking, quizzed Fitzpatrick as to "How would you define it?" referring to Fitzpatrick's continual appeals to "civilization," and pounded his fist on the podium four times, smashing his watch in the process. It appeared that either Susman would burst a blood vessel, or the podium would crumble.

Any other flourishes between Susman and Fitzpatrick were lost in the tumult which followed. When Susman began pounding, Gardner immediately rallied to his support and began applauding furiously. Instantaneously, the entire audience and everyone on the stage, rose to its feet and commenced a two-minute ovation mixed with cries of "We want Susman." With tempers at such a breaking point, a 10-minute recess was called. An hour later, during his regularly scheduled speech, Susman received no less than three more standing ovations.

The other major incident evolved into a tragi-comical farce. While the program continued as scheduled at the Teach-in, a young man calling himself Col. Rudolf Statler, and bearing a striking resemblance to Adolph Hitler, led a fascist retort to the Teach-in proceeding in the opposite lecture hall. Students who had previously carried pickets into the Teach-in and had been ordered out formed the nucleus of Statler's cheering section.

No one could hear much of what Statler was trying to say, if he indeed said anything. He was drowned out by the cries of "Sieg Heil!" pouring forth from his enthusiasts, and hidden by Hitlerite salutes.

Jacques Marchand, one of the many faculty members eyeing the proceedings, commented that "I think the Rutgers student body is being hoaxed. I suspect they're (Statler and company) students from either NYU or CCNY trying to make fools out of the Rutgers students, and I think this hoax is effective."

The Teach-in was sponsored by the University chapter of the Universities Committee on Problems of War and Peace, and consisted of eleven lectures on matters relative to the war in Vietnam, with time allowed for discussion.

Fitzpatrick-Gardner-Susman conflict, (History Professor Eugene) Genovese hushed the audience by acknowledging the fact that "I'm a Marxist and a Socialist and I welcome a Communist victory in Vietnam. I do not believe American foreign policy is irrational. I believe it to be rational, intelligent, crude, and predatory."

"Our policy," he said, "has been to support corrupt regimes because these regimes would allow their countries to be exploited and would stop the spread of socialism... the threat from Cuba," he added, "is its example and its ideology. It suggests that other countries too can be masters in their own house."

"Our policy in Vietnam," Genovese continued, "is a murderous policy designed to provoke the Chinese. I think that only fools think that the Chinese are going to be cowered into attacking us... Johnson is carrying out a policy in defense of national egoism and vested interests. American policy has been forcing an identification between capitalism and national interest. I feel that the national interest should be considered in terms of the needs of our country together with the needs of the world."

Genovese concluded that "The test of patriotism is defense of out national honor. Patriotism today depends on opposition to government policy."

Perhaps freshman Joe Brezin summarized the nearly universal feeling - "This was probably the most worthwhile all-nighter I've ever experienced. Any future one will seem like an anticlimax."

Amidst pickets, scuffles and rowdiness, 1500 people heard the third University teach-in at the gym Thursday night. Sponsored by Students for a Democratic Society, nine speakers discussed "The Cold War" from 7:00 p.m. until 2:30 Friday morning.

The proceedings were marred by a brief exchange of slaps during the 10:15 intermission. An animated discussion was taking place inside the gym between Mr. and Mrs. Walter Lantry of Carlstadt and several students. One of the students replied affirmatively to Mrs. Lantry's question, "Do you think my son (a coast Guard lieutenant) is a drip for being in Vietnam?" Mrs. Lantry immediately slapped the student in the face, and he in turn smacked her with his open hand. Spectators quickly stepped between the two.

At Lantry's suggestion, Dr. Seymour Zenchelsky, moderator of the evening, had begun the teach - in at 7:30 with the Pledge of Allegiance and the singing of The Star Spangled Banner. Lantry's statement was necessary, he said, so that there would be "no comments of Rutgers being red. We will be known as Americans."

The first speaker of the evening was James Rosenau, professor of political science at Douglass. Rosenau prefaced his remarks on "The Role of Force in Foreign Policy" by stating why he had consented to speak at the teach - in. He said that it had been inaccurately reported that he was to defend the American role in the cold war. "It is the duty of the university to examine policies and not to channel them," he said.

The second speaker of the evening was Charles Forcey, associate professor of history at Douglass. Before proceeding to his analysis of the cold war, Forcey spoke on the remarks of Professor Eugene Genovese this spring and the gubernatorial candidate of the Republican Party in New Jersey, State Senator Wayne Dumont.

Facey felt that at the time, Genovese's speech welcoming a Viet Cong victory was both "defensible and sane." Differing with Genovese, Forcey believed that the personal views of the social scientist should be stated freely not only on the public rostrum but also in the classroom.

He went on to say that Communists must be allowed to teach in American universities because freedom of speech is an absolute. "My education, my professional competence suffers today" because of the lack of Communist teachers, he added.

Referring to Dumont, Forcey said that Anyone who knows anything about history cannot fail to see the similarity between Dumont and (the late Senator Joseph) McCarthy.

In speaking on 'The American Response to the Cold War,' Forcey felt that the United States has been winning the cold war since the early 1950's. He concluded that the ideals of freedom have much value for the peoples of the emerging nations, but this may be lost if the United States continues its massive predominance of military force.

Sy Landy began to speak as the endless buzzing in the audience continued, worsening the audibility problem caused by the poor acoustics. Landy is the chairman of the New York Independent Socialist League and he spoke on 'The American Perspective in Vietnam.'

At this point, there was an interruption in Landy's talk as two people walked up to the floor microphones and began shouting questions. Moderator Zenchelsky needed several minutes to return the gym to order.

The audience of the teach - in had been dwindling steadily since midnight. By the time Roger Lockard mounted the stage to give the final talk of the affair, there were only about 100 people left.

Thursday night's teach- in was also a "teach - out", as picketers, placard bearers, protesters, sidewalk lecturers, and concerned individuals outside the Gym competed with the SDS event. Many observers alternated between the more formal discussions inside and the demonstrations outside.

The chants, arguments, and placards of the picketers drew a large crowd throughout the night. At times violence threatened to erupt. Often the intervention of Bob Ochs prevented speakers from being jostled and man-handled by the crowds.

Placards declared, "Rid Rutgers of Reds," "Freedom of Speech, But No Un-Americanism," "A Marxist Killed Kennedy" and "CommUNism." Chants of "Better dead than Red," "the teach-in is a hoax," were shouted by the parading picketers. At one point, fireworks were exploded and Walter Lantry, who was also heard considerably inside, gleefully shouted in response, "They've shot Genovese! Genovese is dead!"

The demonstrators drew comment from the crowd and heated discussions were rampant. Members of the Knights of Columbus shouted that Rutgers students didn't know what the red stripes in the U.S. flag meant, and declared that the students were learning more about the hammer and sickle than the Stars and Stripes.

Dr. A. Carter Jefferson led a discussion on the topic of un-Americanism, following the remark by a student that one of the teach-in speakers was un-American. Jefferson stated that"the whole essence of Americanism is the right to be wrong." He admonished the student, saying,"I think you ought to be more careful about who you call anti-American."

Although the atmosphere at times grew tense and threatening, no incidents of violence occurred during the "teach- out."