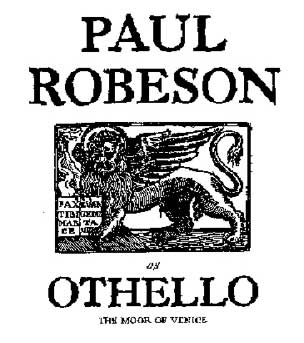 Reproduced from the Theatre Guild Production Program Cover for "Othello" [ca.1943] from the Rutgers University Special Collections and University Archives.

Paul Robeson's theatrical career began while he attended Somerville High School. It was because of his teachers, Miss Elizabeth Van Fleet Vosseller and Miss Anna Miller, that he pursued the arts. His first High School acting experience was the portrayal of Othello, a role that he was to reprise with great success in England and later in the United States of America.

Along with his many other interests and talents, including athletics and scholastic achievements, Robeson's theatrical involvement took a hiatus during his time at Rutgers and Columbia law school. Robeson briefly pursued his legal career in 1923 as a law clerk on Wall Street having never taken the bar exam. It was here Robeson experienced overt racism, at which time he returned to theatrical fold. Paul Robeson's lengthy career in concert, stage, and screen was marked by exceptional performances and controversy.

The experiences of prejudice and racism in these areas gave Robeson notoriety. Later in his life, he used his celebrity status to further the cause of human rights around the globe.

Explore aspects of Robeson's career as a performer. After examining the texts in the sections on Othello and Lyric Changes, be sure to participate in the discussion questions that follow.