Paul Robeson entered Rutgers College as a student on an academic scholarship. More importantly, he knew that he bore the substantial responsibility of achieving the great potential he had demonstrated earlier in life, both in the classroom and as an athlete. Constantly on Paul's mind was the example of his father, who had escaped from slavery, graduated from Lincoln University, faced and overcome adversity many times, and who was Paul's mentor and idol.

As you review the sources for Activity Two, keep in mind the social context of the period 1900-1920, which became a defining intellectual experience for Robeson's artistry, social activism and scholarship. In Activity Two, you are asked to examine sources in a defined sequence, and then respond to the question posed here. The first 2 sources establish a foundation upon which the other sources can be better understood. Place your response to the Activity Two question in the Electronic NJ Learning Forum.

To what degree did Robeson's scholarly work at Rutgers represent a commitment to social change during his undergraduate years and afterwards?

To answer this question, read text excerpts 1and 2. Then examine the remaining sources in chronological order by the date of their creation before beginning your response to the question. 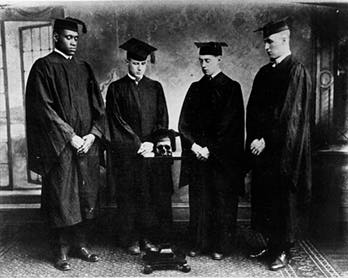 Paul Robeson was elected to the senior honor society Cap and Skull in 1919, honored as one of the four men best exemplifying the ideals of Rutgers. Photo courtesy of Rutgers Special Collections and University Archives. 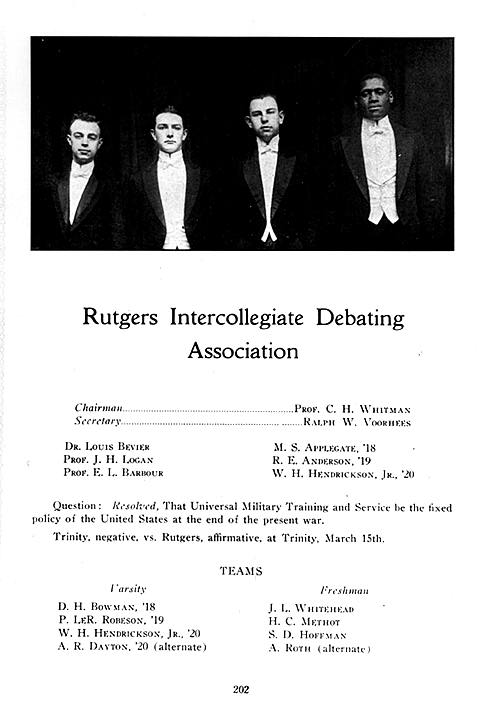 Paul Robeson was a key member of the Rutgers Debate Team. He tried out for the team as a junior and competed on the intercollegiate level in 1918 and 1919. Photo courtesy of Rutgers Special Collections and University Archives.

‹ Activity One up Performer ›