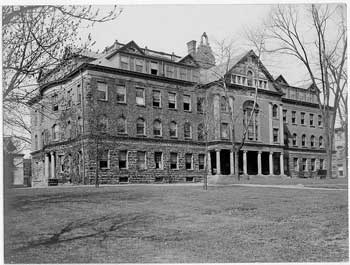 Winants Hall on the Rutgers campus as it looked prior to 1920. This building served as a dormitory for many Rutgers students, including Paul Robeson. In contrast to many other Rutgers students, Robeson was required to live alone in Winants Hall. Photograph courtesy of Rutgers Special Collections and University Archives.

Entering Rutgers College in 1915 as only the third African-American student in the history of Rutgers College, Paul Robeson brought a constellation of talents and potential to his undergraduate experience. At Somerville High School, Paul had excelled both academically and athletically, garnering praise in the classroom, as a debater and member of the school's glee club and in three sports: baseball, basketball and football. In high school, Paul, under the guiding influence of his minister father William Robeson, nurtured his multiple talents with the assistance of supportive teachers such as Anna Miller (English), Elizabeth Van Fleet Vosseller (Music), Miss Vanderveer (Latin) and Miss Bagg (Science). Paul was highly regarded by his peers, the overwhelmingly majority of whom were white students, as depicted in this excerpt from Lloyd Brown's Young Paul Robeson.

His schoolmates admired him as much as they liked him. Thus Douglas Brown, whose later achievements fulfilled his own bright promise as a gifted student, would look back and say:

"It was a rich experience to have four years in school with as great a human being as Paul—to have him as a warm and loyal friend; to have him as a fellow student who was already showing that brilliance of genius as an all-around athlete, as a debater, as a singer and as an actor, and who could, at the same time, make one push very hard to keep up with him in a tough academic course." (Brown, 1997, 52)

Paul Robeson had intended to follow in his father and brother's footsteps and attend Lincoln University in Pennsylvania, his father's alma mater and one of the nation's leading institutions of Afro-American higher education. During his senior year at Somerville High School, Paul participated in a statewide competition offering 4 year scholarships to Rutgers College in New Brunswick NJ. Displaying the determination and intellectual prowess that would characterize both his undergraduate years and professional career, Paul completed the examination's two parts with the highest average score ever achieved in the competition, despite the fact that he had to complete an exam covering all four years of high school, while other examinees only were tested on what they had studied during their senior year. Apparently, the section of the exam covering the first three years of high school had been given during the end of the students' junior year, but Paul had been unaware of it. Undaunted, he took the entire exam as a senior and modestly stated "Well, I won" while not telling others the difficulty of the challenge he had faced. (Brown, 1997, 55)

One other pre-undergraduate connection to his future alma mater occurred during Paul's senior year. Participating in a statewide oratorical contest, Paul chose to recite a famous abolitionist oration by Wendell Phillips. Originally given during the Civil War, Phillips' oration was a tribute to the Haitian patriot Toussaint L'Ouverture, who led the liberation of Haiti from Napoleonic rule. The contest was held on the campus of Rutgers College in New Brunswick, and the panel of all-white judges awarded Robeson third place.

On the Banks of the Old Raritan

The activity modules you find here will deepen your understanding of Paul Robeson's experiences at Rutgers between 1915-1919. Activity One deals with Robeson's athletic experiences while Activity Two concerns Robeson's scholarship during his undergraduate years. You will be able to navigate from one activity to another using the menu bar displayed on the opening pages of each activity module. You may enter your responses to activity questions in the Electronic NJ Learning Forum by clicking on the Forum icons next to the questions.

‹ High School up Activity One ›