While press and public discussed the merits of the WAAC, Congress opened hearings in March 1943 on the conversion of the WAAC into the Regular Army. Army leaders asked for the authority to convert the Women's Army Auxiliary Corps into the Women's Army Corps (WAC), which would be part of the Army itself rather than merely serving with it. The WAAC had been an unqualified success, and the Army received more requests for WAACs than it could provide. Although WAACs were desperately needed overseas, the Army could not offer them the protection if captured or benefits if injured which Regular Army soldiers received. The plans for an eventual Allied front in Europe required a substantially larger Army, with many more jobs that women could fill. Establishment of a Women's Army Corps with pay, privileges, and protection equal to that accorded to men was seen as a partial solution to the Army's problem. 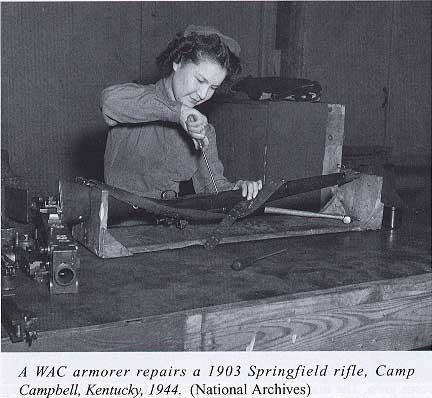 On 3 July 1943, after a delay caused by congressional hearings on the slander issues, the WAC bill was signed into law. All WAACs were given a choice of joining the Army as a member of the WAC or returning to civilian life. Although the majority decided to enlist, 25 percent decided to leave the service at the time of conversion.

Women returned home for a variety of reasons. Some were needed at home because of family problems; others had taken a dislike to group living and Army discipline. Some women did not want to wear their uniform while off duty, as required of all members of the armed forces. Women electing to leave also complained that they had not been kept busy or that they had not felt needed in their jobs. Not surprisingly, the majority of those who left had been assigned to the Army Ground Forces, which had been reluctant to accept women in the first place and where the women were often underutilized and ignored. Some 34 percent of the WAACs allocated to the Army Ground Forces decided to leave the service at the time of conversion, compared to 20 percent of those in the Army Air Forces and 25 percent of those in the Army Service Forces.

With the conversion of the Women's Army Auxiliary Corps to the Women's Army Corps, former WAAC first, second, and third officers became captains and first and second lieutenants, respectively. Director Hobby was officially promoted to the rank of colonel; WAC service command and theater staff directors were promoted to lieutenant colonels. Company commanders became captains or majors depending upon the size of their command and their time in service. Enlisted women were ranked as master sergeant through corporal and private, the same as their male counterparts.

The conversion of the WAAC to the Women's Army Corps and the "image" controversy of 1943 combined to cause a crisis in WAC recruiting. In desperation, some WAC recruiters lowered the standards for acceptance into the corps, and a few even resorted to subterfuge to obtain the necessary numbers of recruits. In two southern states, recruiters haunted train and bus stations, waiting for women who came to send off husbands and fiancÃ©es to war. An Army recruiter would rush up after the soldier had departed and ask the unhappy woman if she wanted to do something to bring her man back sooner. When she answered "yes," the officer asked her to sign a paper. Many of the women thought they were signing a petition. Several days later, these women received notices to report for induction. They arrived at the training centers confused and angry, and many never adjusted to life in the WAC.

The War Department and the WAC leadership recognized the immediate need to step up the recruiting campaign to prevent these occurrences and to increase the number of enrollees who sincerely wanted to aid the war effort. The result was the All-States Campaign and the Job-Station Campaign. In the first, General Marshall asked state governors to assign committees of prominent citizens the task of recruiting statewide companies for the WAC, which would carry their state flags and wear their own state armbands while in training. In theory, state pride would encourage the committees to work diligently to fill their quotas. The Job-Station Campaign allowed recruiters to promise prospective enlistees their choice of duty and assignment location after they completed basic training. Both campaigns were successful, although they caused WAC administrators and training camp officials significant problems dealing with understrength and oversized state companies and with women who could dictate the terms of their assignments after they had completed basic training. Although WAC enlistments never reached the high levels attained early in the war, recruitment maintained a steady pace from the fall of 1943 through early 1945, allowing the War Department to respond to overseas theaters' requests with additional WAC companies.

Click here for information about the public backlash against WAC's!