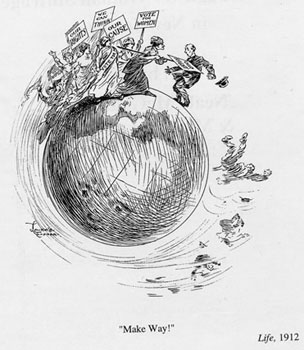 The Electronic New Jersey Women's Suffrage module uses primary source documents to illustrate how women in New Jersey lost and eventually regained the right to vote. Analysis of primary source material such as: government documents, posters, music, photographs, letters, and political cartoons, is the focal point of the site.

"Thomas Jefferson had proclaimed in 1776 that equality would be the bedrock of a new American government. But it took 144 years for women finally to achieve full citizenship in the United States..."

Ward, Geoffrey C. and Ken Burns. Not For Ourselves Alone: The Story of Elizabeth Cady Stanton and Susan B. Anthony. New York: Alfred A. Knopf, 1999. p vii.

Unless otherwise specified, all documentary and photograph sources used in this section of Electronic New Jersey were provided courtesy of the Rutgers University Special Collections and University Archives, the NJ State Archives, and/or the NJ Historical Society