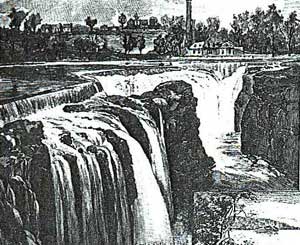 Water is an element critical to human life. We could not live without water! What are the things that water is used for everyday? Brainstorm a list of things that you used water for this week.

The Story of Newark's Water Supply

The late 1800s was a period of rapid industrialization and urbanization throughout the United States. Newark was a major industrial center of New Jersey then, as it is today. Public officials found the increased population and manufacturing to be a formidable challenge. In particular, public officials had to figure out how to supply the city with fresh drinking water, and at the same time, provide outlets for household and industrial waste.

In the 1880s, scientists were only beginning to learn how certain illnesses, such as typhoid, were transmitted. Very few people knew the terms bacteria, germs, and viruses. Today most people know that illnesses can be transmitted through polluted water sources. While residents of Newark could see and smell the impurities in the water from the Passaic River, there was little scientific evidence to demonstrate that the water was a threat to public health. As scientists began examining the water and writing reports testifying to the unsanitary nature of the water supply, Newark's public officials began to recognize that something would have to be done about the water supply for the citizens and industry of the city of Newark.

In this activity, you will play the role of a member of the Board of Pollution in Newark, NJ in January 1889. You will use a variety of reports, newspaper articles, and statistics from the 1880s to determine what your proposal for the water supply problem will be.

Note: All sources employed are courtesy of Rutgers University Archives and Special Collections, unless otherwise noted.

Or go to Alternate Activities