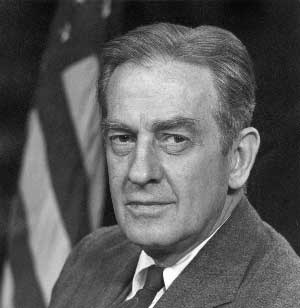 During the 1960s and 1970s executive power and its exercise increased as part of the phenomenon known as the Imperial Presidency. As the Vietnam War progressed in to the late 1960s many Americans began to question the war and the president's power to conduct it. Early in the conflict many Americans unquestionably supported the conduct of the Vietnam War as it related to containing communism. It became apparent to the public that their elected leaders' comments about the progress of the war were increasingly out of sync with what was being reported by the press. In May 1967 Senator Clifford Case of New Jersey traveled to South Vietnam on a fact-finding mission. Upon his return to the United States his support of the conduct of the war began to change by late 1967.

For the rest of the presidency of Lyndon B. Johnson Americans trust in their leaders continued to erode. In the wake of increasing protests at home, the Tet Offensive and the apparent lack of American progress in meeting its war goals in Vietnam it was evident to the president that he did not have the support of the nation. By early 1968 Americans were looking at their leaders with more scrutiny and were less willing to accept their words at face value. Johnson declined to run for re-election in 1968 and former vice-president Richard M. Nixon won the presidency promising to restore law and order and end the Vietnam War. But, Americans' trust in their elected officials had been severely tested by the Johnson Administration.

Throughout President Nixon's first term it appeared to Americans that their trust had been well placed. Nixon assured a rapid conclusion to the Vietnam War, and on the surface the return of troops gave the impression that war was winding down. But, Senator Case and average American citizens continued to question and oppose the execution of Nixon's Vietnam War policies which were designed to end the war. In reality they were escalating casualties on both sides, extending the war into neighboring nations and utterly destroying the nations of North and South Vietnam.

Meanwhile the trappings of executive power were corrupting high level Nixon Administration officials and those in charge of running his re-election campaign in 1972. In his never ending quest to win at any cost, Nixon's staff, allies and associates harnessed the power of the executive branch to destroy and discredit Nixon's opposition. The Watergate Scandal (1972-'74) further eroded Americans' trust of their elected officials, damaged the office of the president permanently and tested the Constitution in a way it so rarely does. Senator Case and others recognized Congress' Constitutional authority to check the powers of the executive and maintain the balance of three co-equal branches of government. Case translated his frustration and outrage at these events by drafting or supporting legislation designed to restore transparency to the government and check the powers of the executive branch

Essential questions that study of this unit will touch upon are:

In this lesson students will work with different types of documents in order to come to an understanding of the following: