Upset over Washington's encounter on the battlefield, Lee sent Washington a series of letters demanding an explanation of his treatment which he felt was unwarranted. This page contains the record of correspondence between General Charles Lee and General George Washington concerning the Battle of Monmouth, along with related reports and letters about this issue.

The sequence of correspondence begins with Lee's letter to Washington, sent from Englishtown two days after the battle. Selections from the letter are shown here.

Questions for interpretation and analysis of the letters' contents are interspersed in bold as you read the correspondence and related sources.

From the knowledge I have of your Excellency's character, I must conclude, that nothing but misinformation of some very stupid, or misrepresentation of some very wicked persons, could have occasioned your making use of such very singular expressions as you did, on my, coming up to the ground where you had taken post; they imply'd, that I was guilty of either disobedience of orders, of want of conduct, or want of courage. Your Excellency will therefore infinitely oblige me, by letting me know, on which of these three articles you ground your charge, that I may prepare for my justification; which I have the happiness to be confident I can do, to the Army, to the Congress, to America, and to the World in general.

Question: Do you see anything offensive in this part of the letter?

Your Excellency must give me leave to observe, that neither yourself, nor those about your person, cou'd from your situation, be in the least judges of the merits or demerits of our manoeuvres; and, to speak with a becoming pride, I can assert, that to these manoeuvers the success of the day was entirely owing. I can boldly say, that had we remained on the first ground, or had we advanc'd, or had the retreat been conducted in a manner different from what it was, this whole army, and the interest of America, would have risk'd being sacrificed.

Question: What explanation does Lee give in justifying his action on the battlefield?

I ever had (and I hope ever shall have), the greatest respect and veneration for General Washington; I think him endow'd with many great and good qualities; but in this instance, I must pronounce, that he has been guilty of an act of cruel injustice towards a man who certainly has some pretensions to the regard of ev'ry servant of this country; and, I think, Sir, I have a right to demand some reparation for the injury committed; and unless I obtain it, I must, in justice to myself, when this campaign is closed (which I believe will close the war), retire from a service, at the head of which is placed a man capable of offering such injuries.

Questions: What is Lee demanding? What does he threaten to do if he does not get satisfaction?

Washington was so upset with Lee regarding the insulting letters he received, he had him tried for misconduct at The Battle of Monmouth.

I am not conscious of having made use of any very singular expressions at the time of my meeting you, as you intimate. What I recollect to have said, was dictated by duty, and warranted by the occasion. As soon as the circumstances will permit, you shall have an opportunity either of justifying yourself to the army, to Congress, to America, and to the world in general; or convincing them that you were guilty of a breach of orders, and of misbehaviour before the enemy, on the 28th inst., in not attacking them as you had been directed, and in making an unnecessary, disorderly, and shameful retreat.

You cannot afford me greater pleasure than in giving me the opportunity of showing to America, the sufficiency of her respective servants, I trust, that the temporary power of office, and the tinsel dignity attending it, will not be able, by all the mists they can raise, to offiscate [obfuscate] the bright rays of truth.

Question: What does Lee mean by the temporary power of office being able to offiscate the bright rays of truth?

I have reflected on both your situation and mine; and beg leave to observe, that it will be for our mutual convenience, that a Court of Enquiry should be immediately ordered; but I could wish it might be a Court Martial: for, if the affair is drawn into length, it may be difficult to collect the necessary evidences, and perhaps bring on a paper war betwixt the adherents of both parties, which may occasion some disagreeable feuds on the Continent; for all are not my friends, nor all your admirers.

Question: Why was Lee now concerned about the effects of a Court Martial?

Washington sent a report to Congress on July 1, 1778 describing the actions taken during the Battle of Monmouth (in part)

After marching about five Miles, to my great surprise and mortification, I met the whole advanced Corps retreating, and, as I was told, by General Lee's orders, without having made any opposition, except one fire given by a party under the command of Col. Butler on their being charged by the Enemy's Cavalry, who were repulsed.

First he was charged "for disobedience of orders, in not attacking the enemy on the 28th of June, agreeable to repeated instructions." The second charge was "for misbehavior before the enemy on the same day, by making an unnecessary, disorderly, and shameful retreat." Lastly he was charged with "disrespect to the Commander-in-Chief in the two letters dated the 1st of July and the 28th of June.

The fact that Washington did not bring charges against Lee until after he received letters demanding an apology suggest by many histortions that he intended to dismiss the matter.

Question: Do you believe Washington would have court-martialed Lee regardless of the letters? Explain why and support your answer with several justifications. 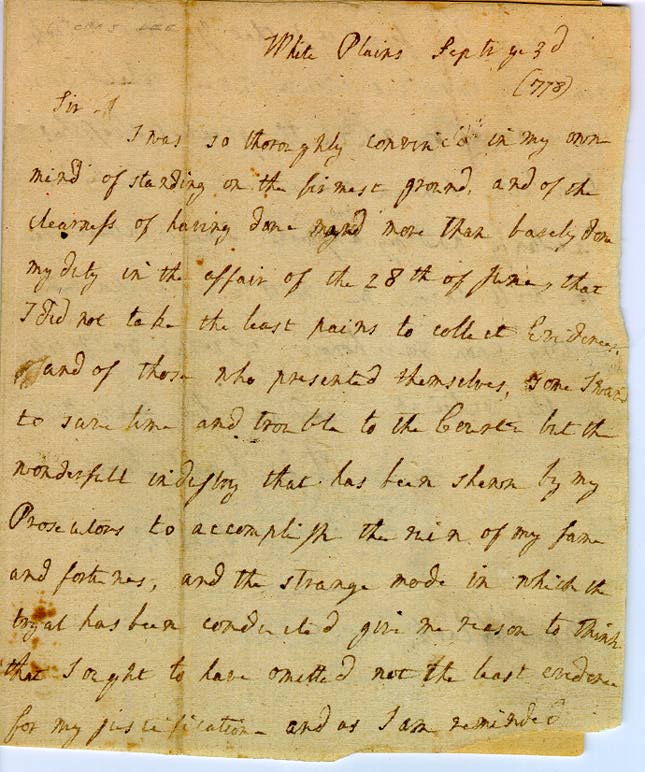 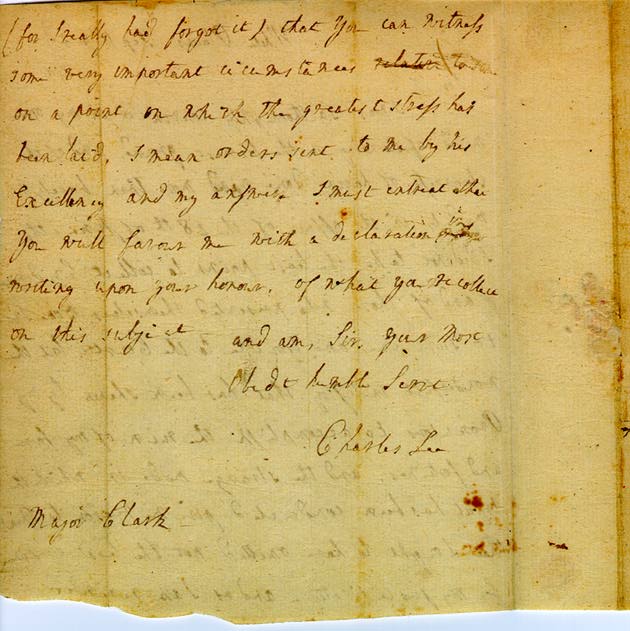