Objective: To understand that inventions have cultural impact.

Do you think inventions are always used as they are intended?

Thomas Edison's inventions influenced the culture of our nation in many ways. He developed the electric pen in response to the business community's quest for more efficient and quicker ways to process documents. Many of Edison's inventions led to unforeseen developments. The electric pen was adapted into a tattoo machine. This was certainly a surprising adaptation! Another example occurred when electricity's power was used for electrocution- a form of harsh punishment, which no one could have foreseen when Edison first worked on the development of electricity. Imagine what it may have been like to be able to go to a place to hear music that had been recorded! Similarly, the change while walking about when electric lights replaced dim gaslights may have seemed miraculous to many people.

The first line of this article says, "Mr. Edison the inventor of the phonograph, has committed a further outrage upon public privacy - if the term is to be permissible — by inventing an instrument that he is pleased to call the aerophone."

It continues, "There is literally no placing any limits to the mischievous enterprise of the phonograph....The very walls have ears in a horribly literal sense." The article goes on to say that, "what is whispered nearby becomes amplified and repeated. The aerophone was invented as a business machine. The author of this article made a grim prediction, "Business, marriage, and all social amusements will be put aside, except by totally deaf men."

With a partner list in your journal 5-10 unintended and potentially surprising or embarrassing uses for this machine. How do you think life may have changed when this machine was used for music?

Can you think of scientific or other developments that have become used for other purposes?

This letter describes a request made by Thomas Edison to locate the best word for electrocution. Why do you think that Edison would be concerned with the public's perception of electricity used to end someone's life? 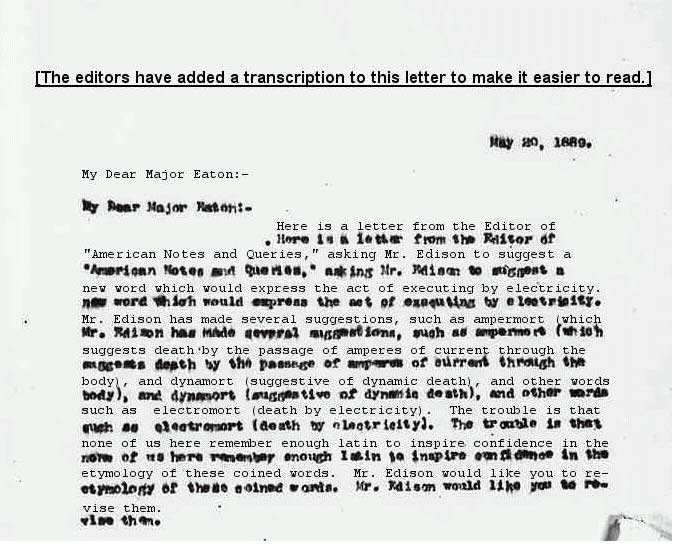 Discuss the raw power of electricity. Include crime and punishment. Connect the development of the electric chair. Try to hypothesize why this method was considered. An interesting point to make might be that due to the lack of DNA analysis positive proof of guilt was difficult. Encourage students to develop criteria for which electrocution would or would not be used.

Be sure students can defend their positions rationally and that they understand the significance of this political issue. 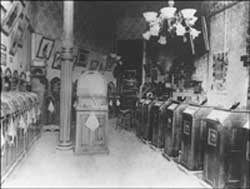 Lights were eventually used to illuminate outdoors thus making evenings out a possibility. Nickelodeons were machines that played music.

Students - discuss the fact that lights would make it easier and safer to walk in towns at night. Help students understand that nickelodeons and nickelodeon parlors would have helped develop towns and enhance people's leisure time. Have them journal what they think people would have thought of nickelodeons and the parlors used to enjoy them as a place of recreation.

As students develop advertisements help them to understand the impact that lights and nickelodeons had on people's lives. 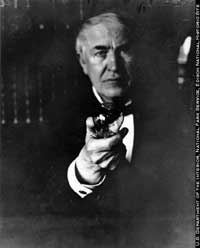 Do you think that Edison's inventions are being further developed? This is a picture of Edison holding a light bulb. Do you think he imagined the many uses for laser lights?

Be a traveling salesman and convince the "customers" that laser light is the best personal and economic development since incandescent light. 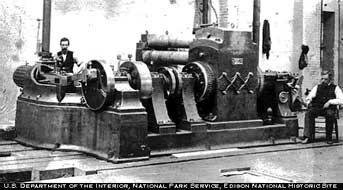 From 1876 through 1882 Edison obtained over 400 patents (Pretzner, 16). Many of these would lead to inventions that needed to be produced and distributed. Manufacturers need suppliers of goods and workers to employ. Much of the production work was performed in machine shops.

his machine shop shows the need for many types of things like machines and tables etc. Companies like this were opening up and they needed to be supplied with many things. They also needed skilled workers.

Select a partner and identify a business that would benefit from supplying either a company or Edison's generator company. List the ways people's lives and the economy could improve from your business and the job opportunities that you would provide.

‹ Growth of Industry up Thomas Edison on Trial ›