Was Slavery a Sin? 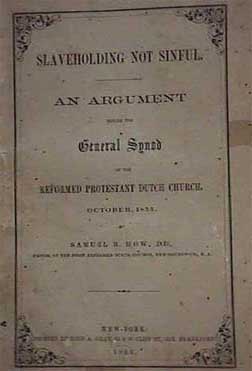 The Reverend Samuel B. How, "Slaveholding Not Sinful."

"The mass of American people have never considered the holding of slaves as at war with the Declaration of Independence...and that it is not against natural justice and Christianity, we shall now endeavor to prove."

"God took Abraham, a slaveholder, his children and his bought slaves into covenant with himself without expressing the slightest disapprobation of his holding slaves."

"It was lawful by the law of Moses, to make of the heathen bondmen for life, and to hold their children in bondage."

"The security of property and the security of the owner in the possession of it, lie at the foundation of civilized and Christian life, and where they are unknown men are wandering tribes of barbarous, ignorant, rapacious, debased...The attempt to deprive others of property...is to strike a blow at the very existence of civilization and Christianity."

"Let us suppose that slavery was exterminated by violence, and that every slaveholder was compelled to relinquish all his slaves, would this better the condition of the world?..It would merely let loose a multitude of ignorant, unprincipled, immoral men, and give them the power to follow the promptings of their evil hearts."

"You...coolly transferred the scene of the conflict from the cotton fields and rice swamps, the slave pens, the auction blocks and whipping posts of the South...to the land of the olive and the vine."

"The Hebrews...had no nation or race of men about them doomed to slavery...their bondmen from among their own people...could only be held for a limited time."

"Abraham...had concubines and had children by them without reproof, but can this furnish any pretense for a justification of the same thing now?"

"When a certain king arose in Egypt...and began to oppress the descendants of Jacob, and persisted in his refusal to let them go, for their sakes the land was infested with frogs and lice and flies and locusts, enveloped in darkness, and smitten with hail and the death of the first born...all because of the cruel bondage in which the people were held."

"The Bible says, 'If a man smite the eye of his man-servant, or the eye of his maid, that it perish, he shall let him go free for the eye's sake'...but sad to say, the poor, powerless, friendless slave of this 'glorious Union,' has no such protection from the law. The master...may smite out one of his eyes or both of them...but the victim is still his slave forever."

Read the excerpts on this page from two pamphlets written in New Brunswick, NJ during the civil war and answer the following questions. (See excerpts above)