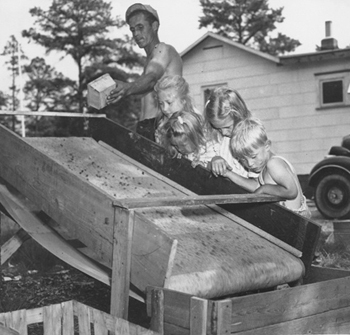 Like cranberries, wild blueberries growing on low bushes in the New Jersey Pine Barrens had long been picked and used by local inhabitants going back to earliest settlement. In the first half of the 20th century, the harvest, restricted to just a few weeks each summer, became a cottage industry of sorts with excess berries being sold at produce stands along the shoulders of New Jersey Highways. This was especially true along New Jersey Routes 70 and 72 where many motorists going to or returning home from the shore stopped and purchased baskets or buckets full of this summer-time treat.

In the present day New Jersey is famous for its cultivated blueberries, different from its forebears in terms of size, number of varieties and the fact they are highbush hybrids. Like its cousin the cranberry, blueberries thrive on the peculiar soil characteristics of the New Jersey Pine Barrens. This allowed development of a second agricultural cash crop in areas deemed otherwise too sour for production agriculture.

Much of the credit for development of highbush blueberries in New Jersey goes to Elizabeth Coleman White, daughter of cranberry grower Joseph J. White and resident of Whitesbog near Pemberton and Browns Mills. Miss White, or Miss Lizzie, as she was more commonly called, devoted her life (1871-1954) to the study and breeding of blueberries.

In 1911, her attention was attracted to a federal government report detailing the early efforts of a USDA researcher named Coville in breeding experiments on highbush blueberries taking place on his home farm in the mountains of New Hampshire. The report was shown to her father. Believing they had both the land and the resources to lend assistance and themselves quite interested in the possible research due to their own earlier efforts with cranberries, Miss White typed a letter of invitation to the USDA containing the family's offer of land and resources for future combined research. The invitation and its stated conditions were quickly accepted and Frederick Coville soon journeyed to New Jersey to begin a combined research with Elizabeth White at Whitesbog, a collaboration that was to last more than twenty years.

Their efforts resulted in the identification of three requirements necessary for successful commercial growth of blueberries:

Local woodsmen were sent into surrounding areas to find blueberry bushes bearing exceptionally sized fruit. Once located, cuttings were made, brought to Whitesbog and crossbred with other varieties. Research efforts were aimed at documenting each variety in terms of size, color, flavor, texture and time of ripening. It was not uncommon for crossbred varieties to exhibit one or two of the desired characteristics only to lack in a third or fourth essential. In such cases, after careful documentation of all the particulars, it was also not uncommon to see upwards of a thousand blueberry bushes cut down, stacked until dry and then burned.

Blueberry bushes found by local woodsmen and chosen for crossbreeding were named for their discovers. One of the most promising bushes was found by a Rube Leek near a cranberry bog on the Whites' property. An immediate dilemma presented itself. A new variety could hardly be called a "RUBE", and "LEEK", name of an onion wasn't much better. Thus, White and Coville combined the first name RUBE with L for LEEK and called the variety RUBEL. It turned out to be the granddaddy of their research efforts, and today, perhaps 90% of New Jersey's commercial blueberry crop is descended from the lone bush found 85 years ago growing along side a cranberry bog in Burlington County. For a story in Elizabeth White's own words, read the radio script from a program she recorded in 1937 that described her life's work at Whitesbog perfecting the blueberry for the commercial market.

Through these efforts of Elizabeth White and Frederick Coville, commercial blueberries first came to market in 1916. First introduced in New Jersey, markets were expanded as available quantities, packaging and transportation increased. In 1918, a New Jersey Cranberry and Blueberry Laboratory under the leadership of Charles Beckwith was also located at Whitesbog to assist in the on-going scientific investigation of both cranberry and blueberry propagation. Although initially formed to investigate cranberry related issues, as the blueberry research expanded, the laboratory's work gradually shifted focus. The laboratory remained at Whitesbog until transferred to Pemberton in 1927. It again later moved to Chatsworth where it remains to this day.

The present day health of the New Jersey blueberry industry (No. 1 small fruit harvested in terms of value) is a direct offshoot of the scientific research that created the industry in the second decade of the century. In fact, Miss White wrote in 1920 "I believe the cooperation of science with experience in commercial culture of a closely allied fruit has hastened the development of better blueberries." The continued research by White and others led to technological improvements in harvesting aimed at reducing crop damage and packaging to prolong shelf life, chief among these being the invention of a mechanical harvester and use of cellophane. Although Elizabeth White is now deceased and her ashes spread among the fields and bogs she called home, her legacy lives on through the many varieties of berries that successfully grow mainly in Atlantic and Burlington Counties. And, as a final point in measuring success, New Jersey with her two county production, ranks 2nd nationally to only Michigan, a much larger state, in the production of cultivated blueberries.