When do political and socio-economic circumstances justify protest and rebellion (violent or non-violent) against societal status quo?

What actions would you be willing to take for a cause you strongly believe in?

How far have colleges come in achieving diversity? 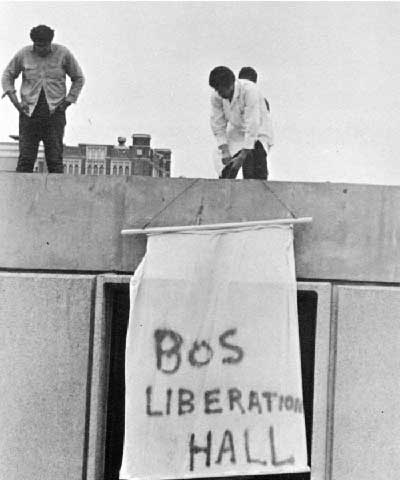 Historians may disagree as to what event was the impetus for the beginning of the Civil Rights Movement in America, but all agree that whether it was Emmett Till's murder, Jackie Robinson's integration into major league baseball, the groundbreaking Supreme Court decision in Brown v. the Board of Education, or the Montgomery Bus Boycott, African - Americans in the mid-twentieth century were faced with a combination of racism and extreme social and economic inequality, as well as the denial of participation in our "democratic" process.

While many individuals contributed to the movement (i.e., Rosa Parks, Bayard Rustin, Ella Baker), the Rev. Dr. Martin Luther King Jr. emerged as the leader of an emergent organization dedicated to nonviolent direct action to bring about desegregation and greater political, social and economic equality for black Americans. Other leaders emerged in the early 1960s including Medgar Evers and Malcolm X. Malcolm X differed with Dr. King in that he believed in black separatism and black nationalism, rejected King's commitment to nonviolence, and came to lead an organization called "The Nation of Islam."

Prior to his assassination in 1965, Malcolm X sought reconciliation with King. By the late 1960s, an emergent "Black Power" movement whose leaders included Stokeley Carmichael, Eldridge Cleaver, Huey Newton, and Bobby Seale, replaced the integrationist, nonviolent King philosophy. Rather, it stressed the socio-economic alienation and plight of the black urban poor.

This new Black Power movement along with the assassination of the Reverend Dr. King in 1968 helps to provide the context for the events which occurred at Rutgers University and on college campuses across the United States.

"Catalysts?" provides the perspectives of both a group of black students as well as the editorial of the student-run newspaper in the wake of the Reverend Dr. King's assassination. Both writings emphasize societal and institutional inequalities. Students will be asked to write either an editorial or a letter to the editor as an activity.

"Why Are You Protesting?" Protesting comes in a variety of forms including sit-ins, boycotting of classes, stink bombs, poems, songs, and political statements. In this lesson, students are asked to generate a creative product (song / rally poster / poem, etcâ€¦) based on a poem, a photograph, and a political statement provided.

"Rebellion!" includes a collection of photographs, newspaper articles, and a list of student demands and administrative response. After contemplating what groups in American society or your school setting are alienated today and why they feel excluded, students will create a list of demands that would help to alleviate their sense of exclusion and compare / contrast that list with the Black Organization of Students (BOS) list of 1969. A planned strategy for rebellion will then be organized within the framework of a scored discussion.

"Win or Lose?" examines the fallout of student demonstrations at Rutgers University through a series of correspondence, student newspaper editorials, and a photograph. These documents present a variety of perspectives and reactions to the BOS. In a continuation of the exercise in "Rebellion!", students will conduct a series of interviews and then analyze the reaction of their peers, their community members, their school administration, and their family to their demands and actions. These results will be shared at a roundtable discussion.

"How Far Have We Come?" is a statistical exploration of college enrollment from the1960s through 2009. Students will be asked to examine the data, compare it to Rutgers University, and draw conclusions from statistical trends. Using this information, students will craft a two page essay as to whether or not the US Supreme Court was justified in its decision to begin dismantling Affirmative Action programs with Ricci v. DeStefano (2009).