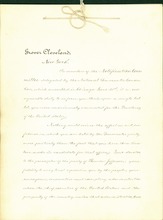 TitleNomination for President for the Democratic Party of 1892
NameCleveland, Grover (Recipient), National Democratic Party
Date Created1892
SubjectDemocratic Party (U.S.), Presidential Election, Democratic National Convention
DescriptionUnique document composed by the Nominating Committee of the National Democratic Party 1892 presented to Grover Cleveland between his terms of office. Signed by representatives from every state and territory within the nation.
NoteCourtesy of the State of New Jersey Division of Environmental Protection, the Grover Cleveland Birthplace Historic Site, Caldwell, New Jersey.
NoteGrover Cleveland, - New York, - As members of the Notification Committee delegated by the National Democratic Convention, which assembled in Chicago, June 21st, it is our agreeable duty to inform you that, upon a single ballot, you were unanimously nominated for the Presidency of the United States. Nothing could evince the affection and confidence in which you are held by the Democratic party more positively than the fact that you have three times been made its candidate for that office. Your devotion to the principles of the party of Thomas Jefferson, your fidelity to every trust reposed in you by the people, your courageous, conservative and exemplary administration when the chief executive of the United States, and the prosperity of the country under that administration, have won for you the respect of every citizen. In the maintenance of the doctrines which you have so clearly expounded and so consistently advocated, and which form the basis of the declaration of principles formulated by the Democratic convention which has again placed you in nomination, rests the hope of the people for constitutional government. They turn now to the Democratic party that the blessings of civic and industrial liberty may be secured to them, and in response to the people's demand that party has chosen for its leader him whose public record conveys the guarantee that the will of the people will not be thwarted. It is, then, not only with a sense of profound personal satisfaction, but also with the assurance that your nomination is welcomed by every man who feels the burden of unjust taxation and the distress of unwarranted legislative interference with, the rights of the citizen, that we inform you, of the action of the National Democratic Convention and submit herewith its declaration of principles. Firmly believing that there is no other safe repository for the liberties of the people, and the welfare of the nation, than the hands of a democratic administration, we most heartily congratulate the country upon the opportunity presented by your candidacy for a return to the methods and measures of that party which has administered and will ever administer the government for the good of our country and in the interest of the entire people. That our cause - the people's cause - will triumph, we have no doubt, and judging the future by the past, the administration which you will give to the people of the United States will be directed by wisdom, statesmanship, integrity and patriotism, and will cause your fellow democrats to regard with the same pride and pleasure your future career as President of this great Republic, that they now enjoy in the remembrance of your former administration. - We are, sir, - Respectfully yours, - William L. Wilson, [sig.] Chairman.; Nicholas M Bell [sig.] Secretary.; Alabama Rufus N. Rhodes [sig.], Arkansas B.R. Davidson [sig.], California Stephen M White [sig.], Colorado Frank Adams [sig.], Connecticut Robert J Vance [sig.], Delaware Robert J Reynolds [sig.], Florida W. D. Chipley [sig.], Georgia John Triplett [sig.], Idaho G. V. Bryan [sig.], Illinois Thos. M. Thornton [sig.], Indiana William A Cullop [sig.], Iowa L M Martin [sig.], Kansas James W Orr [sig.], Kentucky John P. Salyer [sig.], Louisiana A. W. Crandall [sig.], Maine Edward C. Swett [sig.], Maryland L. Victor Baughman [sig.], Massachusetts Patrick Maguire [sig.], Michigan R. A. Montgomery [sig.], Minnesota C. M. Foote [sig.], Mississippi W. V. Sullivan [sig.], Missouri J. W. Walker [sig.], Montana S. T. Hauser [sig.], Nebraska J. A. Creighton [sig.], Nevada [no sig.],New Hampshire H R Parker [sig.], New Jersey Geo. H. Barker [sig.], New York Norman E. Mack [sig.], North Carolina K. Elias [sig.], North Dakota Andrew Blewett [sig.], Ohio R. R. Holden [sig.], Oregon Henry Blackman [sig.], Pennsylvania J Henry Cochran [sig.], Rhode Island Fayette E Bartlett [sig.], South Carolina Theo D Jervy Jr. [sig.], South Dakota Wm R. Steele [sig.], Tennessee W. A. Collier [sig.], Texas J. H. McLeary [sig.], Vermont Oscar C. Miller [sig.], Virginia A. Fulkerson [sig.], Washington John Collins [sig.], West Virginia B. F. Martin [sig.], Wisconsin James Bardon [sig.], Wyoming Robert H Homer [sig.], Alaska [no sig.], Arizona E. E. Ellinwood [sig.], Dist. of Columbia Henry E. Davis [sig.], New Mexico E. V. Long [sig.], Oklahoma [no sig.], Utah H. P. Henderson [sig.], Indian Ter. Solomon E. Jackson [sig.]
Genreofficial documents
Time PeriodThe Industrial Revolution (1870-1900)
Persistent URLhttps://doi.org/doi:10.7282/T34B2Z78
LanguageEnglish
CollectionGCB Grover Cleveland Birthplace General Collection
Organization NameGrover Cleveland Birthplace State Historic Site
RightsThis resource may be copyright protected. You may make use of this resource, with proper attribution, for educational and other non-commercial uses only. Contact the contributing organization to obtain permission for reproduction, publication, and commercial use.