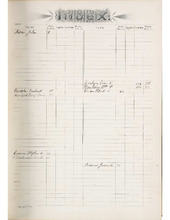 "Comrade John Adam who was born the Tenth day of May A.D. 1839 in Bavarian County of ___ State of Germany

Was Confined in Hospital at Davies Island was Wounded Sept 17, 1862

"Comrade Frederick Buckalew who was born the Twenty Second day of November A.D. 1829 in Georges Road County of Middlesex State of New Jersey

Some of my most Intimate Comrades in the Service: Jacob Janeway, Captain John Manning, Wyckoff Gariguer, Nickolas Schrumm, Adam Geiple"

"Comrade George Henry Bradford, who was born the Sixteenth day of February A.D. 18___ in New Brunswick County of Middlesex State of New Jersey

Was First Discharged as Private at Brandy Station Va on Genl. Orders No. 108 A of P. [Army of the Potomac?] and was transfered to Navy August 19th 1864

And Was Finally Discharged 7th of June 1865 Expiration of Term

The First Battle Engaged in was Mine Run, 2nd Mobile Bay, Fort Fisher

The most important event of Service was at Mobile Bay"

Was discharged as Private October 7th, 1864 at Trenton New Jersey.

I deem the most important event at Chancelorville [Chancellorsville] I left the Rank & Rushed forward Hat and Gun in hands said Come on Boys we captured 7 stand of Coulers & while on the seven days march was stricken with typhoid fever and had to be carried to Hospital of the White House from the [there?] was sent North to Lie But Good Care from my sister was soon able to join my Regiment"

"Comrade George M. Churchward who was born the 17th of September A.D. 1843 in New Brunswick County of Middlesex State of New Jersey

Was Discharged at Freehold N.J. as private same Company & Regiment 4th Day of July 1863 being the expiration of term of service

The first Battle I was engaged in was Fredericksburg Va. The Second was Chancerville [Chancellorsville]

Was never Wounded nor in Hospital nor taken Prisoner

The most important event in my Service was to get home

Could not think of any more"

“Comrade James H. Forman who was born the Twenty Third day of July A.D. 1843 in Kingston County of Middlsex State of New Jersey

Was Corporal and acted as Sergeant part of the time while in service. October 1st 1864 was Promoted to Corporal Rank at Close of War same as above Stated

This is made out from the records of the Adjutant General’s Office recorded at Trenton who was then William S. Stryker A.A.G. was made October 5th 1885”

“Comrade Thomas Francis Garigan who was born the Fifth day of June A.D. 1845 in Catskill County of ______ State of New York

I deem the Most Important Event the Battle of Reams Station on the Welton R.R. We had Burned the Rail Road before the Battle started.”

“Comrade Runyon V. Giles who was born the fourteenth day of February A.D. 1846 near New Market County of Middlesex State of New Jersey

Was Discharged the 12th day of July 1865 as Private at Greensboro N.C. Close of the War

Was Confined in Hospital at Hampton VA in the Fall of 1864.

Was finally discharged at Trenton NJ at close of war

Was taken prisoner in 1862 after the 2nd Battle of Bull Run by the 82nd Va. Cavalry Confeds, was parolled on the field by reason of having billows fever

Most important event, the opening of the Mississippi River, taking of Vicksburg and the Battle of Gettysburg and flanking of Lee, the next important was a furlough of 30 Days but at a Sacrafise [sic] 3 More Years I had already served 2 years, but youth is Like sun shine and the service has never been grugd [sic] Country as it extended the hopes of enslaved Humanity both Black and White and have every honest man a possible future to have what is dearest a Home and the Proud sense of notiveduality [individuality?] the Glorious expansion of Democratic Principles the diserording [disordering?] to old Ideas that Royalty was God’s Handiwork”

“Comrade Nelson Pollard who was born the Eleventh day of August A.D. 1839 in Scotland County of _____ State of Connecticut

“Comrade John V. Parsell who was born the Ninth day of February A.D. 1829 in 62 Church St Middlesex County of ____ State of New Jersey

First Enlisted April 27th 1861 at the Court House New Brunswick New Jersey Entered the service at Trenton N.J. as Corporal resigned from that for peace sake and took the Drum as an expert Company K Captain’s Casher) [?] 3rd Reg N.J.V. Colonel Stryker Commanding I did not seek the Drum Major until I won it October 1862 Rank at Close of War was Drum Major

Was first discharged when my time was up July 31st 1861 at Trenton New Jersey I Enlisted at Freehold New Jersey in 28th Regiment August 30th 1862 Col Wisewell was sent on to Washington to Genl Sumners 2nd Army Corps, was next Discharged from the Hospital at Portsmouth Grove Rhode Island for Disability and was finaly [sic] Discharged at Providence Rhode Island for permanent Disability.

Engaged in the First Battle Bull Run I saved the Flag of the 3rd New Jersey Took it to Fort Runyon, 2nd Battle Fredericksburg

Was in Lincoln Hospital at Washington, Portsmouth Grove Rhode Island

I was [sic] By Rebel scouts but I made my Escape with others in the night to Washington Reported to Gen Mortindale showed him pass check was given Transportation to Acyeria [?] Creek to my Regiment.

Intimate Comrades all the Officers

Laid out all Night Burried [sic] in the snow looking at the turkey Buzzards I was discovered by Surgeon John Richmond of the 31st N.J.Vols sent to Washington recovered went and fought the Fredericksburg Battle”

“Comrade David H. Robotham who was born the Fifth day of June A.D. 1843 in Jersey City County of ____ State of New Jersey

Was Discharged as Private June 21st 1864 Expiration of 3 years

The most Important event of my service Coal [Cold] Harbor Gettysburg Weldon R.R. Wilderness & Many Others

“Comrade Nicholas Schrum who was born the Twenty Fifth day of December A.D. 1842 in Bavaria County of ______ State of Germany

Was Discharged at Trenton N.J. August 1865, end of War

Was Wounded on Head at Cold Harbor

Some of my most intimate Comrades in the service, Adam Geiple, George Feese, J.N. Terrill, John Stroble, George Bradford

Was always Healthy & ready for Duty

I saw something in connection with my military service which was A Comrade sitting on the Ground with Gun up at shoulder as in the act of shooting examined Him and found him Dead.”

“Comrade J. Newton Terrill who was born the Tenth day of July A.D. 1842 in Westfield County of _____ State of New Jersey

The most important events. After being away from Home 16 Months Received a 10 Days Furlough Home on Christmass [sic].

Had Charge of Prisoners [sic] Headquarters 3rd Div 6th Army Corps a Soldier named Kelly Deserted to the Enemy, he was Captured and sentenced to be shot. I placed him on his Coffin tied his arms and feet and placed a Bandage over his eyes, and gave the Firing squad the order to Fire. Eight Muskets were loaded, with Ball Cartridges, and four Muskets with Blanks. He fell Dead on his Coffin 8 Balls having [sic] pierced his Body. The Division was drawn up in a hollow Square 3000 strong it was a Sad affair one I Will Never Forget.

Was Confined in Hospitals at Baltimore Washington Newark N.J.

Was first Discharged July 31st 1861 at Trenton Expiration of Term

Was taken Prisoner at Harrisburg Va Jan. 6, By Stonewall Jackson

“Comrade Archie G. Young who was born the Thirtieth day of August, A.D. 1840 in Murhill County of James City State of Virginia

Was Transferred to the South Atlantic Squadron

The First Battle Saint Johns [sic] Bluff, Fort Sumpter, Fort Wagner, within these Forts seven days on the same stretch then to Rebel Ram Atlanta which we Captured in Warsaw Sound Georgia I was sun struck & Remained on the ship attended by Doctor Alcot. My [entry ends here]”
Genrejournals (accounts)
Time PeriodCivil War and Reconstruction (1850-1877)
Persistent URLhttps://doi.org/doi:10.7282/T30G3JMR
LanguageEnglish
CollectionCivil War
Organization NameNew Brunswick Free Public Library
RightsThis resource may be copyright protected. You may make use of this resource, with proper attribution, for educational and other non-commercial uses only. Contact the contributing organization to obtain permission for reproduction, publication, and commercial use.